I loved this book so much, where do I begin?
Susan and Stitch had one hot night, she thought they had totally connected and then he up and disappeared on her. Months later as she is trying to set up for a baby shower, he shows up at her door, sinfully sexy with arms laden with supplies for the shower. She throws him the cold shoulder but he sees beyond what she is saying, and he still wants her just as much as he did all those months ago. But she works for the police department and a guy like him would be no good for her, especially because she’s going for a promotion.
While Stitch carries a lot of insecurities that stem from his upbringing, he’s exactly the kind of man that Susan needs. They balance each other out and as Siegrist writes “…the only thing that has been keeping me sane, as crazy as it may sound, is you. You’re my perfect disaster.”
While being fourth in the series, One Taste of Sin reads as a perfect standalone as I can attest to as I have only read book one in the series, but trust me, the other two will be done soon. It brings in characters from the other books smoothly, so you get a taste of Stitch’s life and Susan’s life in the police force with her co-workers and their friends. Siegrist promises your heart will swoon, and she delivers laughter, heat, intensity and plenty of swoon-worthy moments.

Here’s one of the teasers: 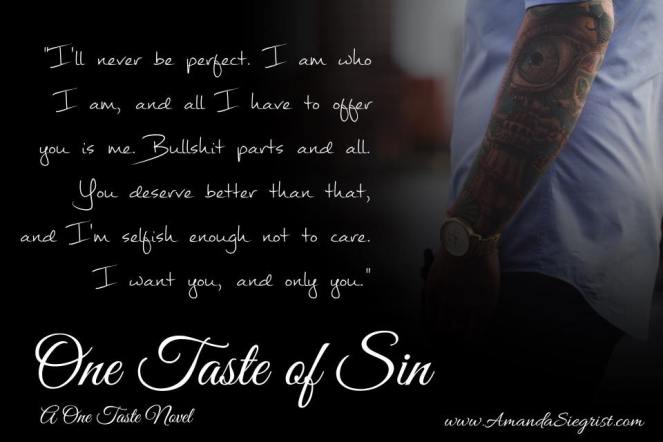 You can read my review on Goodreads. Add it to your tbr! If you like my review, please consider giving it a like.

You can pre-order One Taste of Sin on Amazon for 99 cents. Order it now before the price goes up.