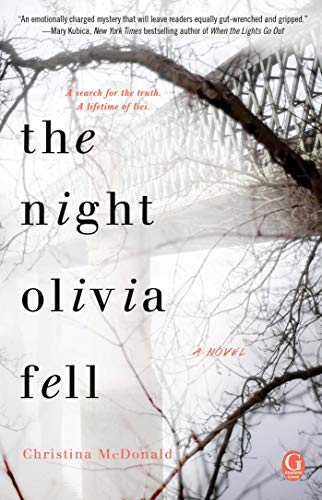 I knew from the blurb alone that The Night Olivia Fell was going to be emotional and suspenseful, and McDonald definitely delivered. Abi learns that her daughter has been in an accident and is now braindead. Not only is her daughter hooked up to a bunch of machines, and Abi has to learn to say goodbye, but we learn that Olivia is pregnant. Abi will have to watch her daughter in this condition for months as she waits for her grandchild to grow enough to be delivered.

What unfolds is Abi and Olivia’s story, told in alternating chapters. We watch Olivia in her final months alive as she traverses finding her father, learning to cope with school and her mother’s demands, dating, and severe bullying. We watch Abi desperately try to piece together her daughter’s last days, to figure out who the father of Olivia’s baby is, and we watch Abi try to figure out who did this to poor Olivia, because the police aren’t helping and Abi’s maternal instinct knows there is more than she’s being told.

I loved Olivia’s persistence in knowing that someone was keeping the truth from her. My heart hurt for her that Sarah didn’t seem as on board with figuring out what happened to Olivia. I can understand not wanting your sister to get caught up in it all, but Abi could have used the support. Her fears could have been easily brushed off as a mother’s instinct, but that “click” she had when she realized that she wasn’t taking seriously really set the pace to find out what happened and who did it.

There were some really great characters in the book. Anthony was a great friend to Olivia and he helped her immensely in her path to figure out what happened. While Sarah was just a minor character, her unwavering support of Olivia was endearing. Olivia is the definition of a perfect main character because even in the face of losing her daughter, she’s strong. She knows something is off and she follows her gut. I found myself cheering her on with each step and each new discovery.

McDonald did a great job with having the reader question everyone, every time they came into the scene. I was questioning everyone, it was great and really well done. This was such a fun read because it was emotional, but stressful, which you come to expect from thrillers. Really well done.

For now you can read my review on Goodreads as The Night Olivia Fell hasn’t released yet. But you won’t have a long wait to read it yourself, as it releases February 5th and is available for preorder on Amazon for $9.99.