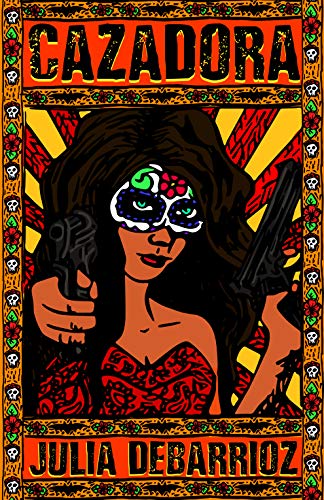 I had read Compañera which DeBarrioz had labeled book 0, and as soon as I got a KU subscription I snagged up Cazadora, and I am so glad that I did.

As a supernatural bounty hunter for the PCT, Dakota takes down werewolves, though more often than not, she has tranquilizer darts in her gun so she can bring them in alive. But the latest weres aren’t testing for the lycanthrope gene, so how exactly are they changing, especially during the day?

Meanwhile, the head of a narco family wants Dakota to find his missing daughter Inez. She’s not sure why she agreed to look, as it could get her into a lot of trouble. But Dakota is known for finding herself in the middle of trouble, so this is right up her alley.

There’s still a heavy romantic undercurrent swirling between her and the vampire Diego, but Dakota has high walls, and she just can’t seem to let him in. Even though he has proved himself trustworthy and adoring, she’s just not ready. But she can definitely use his help as things get heated between the Were situation and finding Inez.

The Huntress, la Cazadora, as she is known, is indeed widely known, amongst the weres, shifters, and witches. Her name is spoken in fear and admiration. She’s good at what she does, even if she doesn’t always have the most conventional means at getting things done.

This is a continuation of Compañera but I don’t feel like you had to have read it to follow the storyline, but it definitely adds to it. When I had read Compañera, I was immediately impressed with Dakota, and even more so in Cazadora. She’s a strong main character, she’s smart, assertive, and resilient. She guards her heart carefully, but I imagine when she is ready to let down her walls, she will love as deeply as she lives. Cazadora has so many elements that mesh well together, suspense, a bit of romance and fantasy. DeBarrioz has included art and lore to create fantastic characters and creatures. A wonderful read.