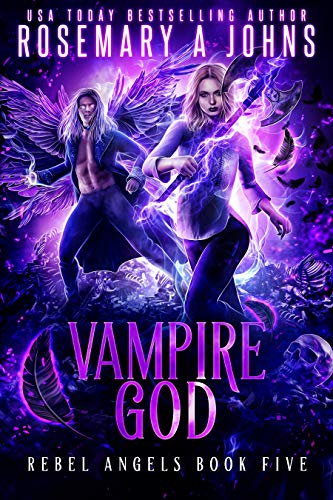 Violet is in the world of Seraphim and she has a few huge tasks ahead of her. She needs to take the test by monster, which no one other than Fae has ever survived. She also needs to take care of her father. Everything is a game to him and he’s hurt her family and others for far too long and he must be stopped.

Violet has come a long way in her journey. She’s less impulsive this time, she thinks about her actions and the repercussions. She is also so much more careful with her family, making sure they are being taken care of and that she isn’t asking them to do anything they wouldn’t want to do.

There were moments in Vampire God that I was worried either Violet or one of her family members came too close to the edge. The punishments that they had to endure were sometimes life-threatening and I found myself on the edge of my seat, hoping with all hope they would survive. There were so many secrets revealed in this one that I can’t share because I don’t want to spoil it, but let’s just say that Violet learns there’s so much more to herself than she ever realized.

John’s has even made me a fan of some characters I never really liked one way or the other in the past, such as Lucifer. The way Violet felt for him was palpable, and that in turn made me softer towards him. This has been such a fun series, it’s been amazing watching Violet grow through all of the challenges she’s been presented or landed herself into. A fabulous way to end the series.

You can read my review on Amazon, Goodreads, and Bookbub, if you’ve enjoyed it, give it a “like”. Vampire God is available on Amazon for $3.99.