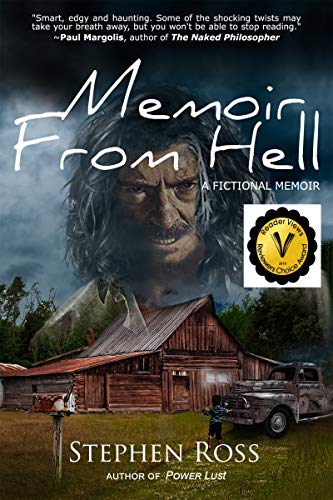 I knew from the blurb that Memoir from Hell was going to be a tough read, but I’m glad that I read it. We start the story with a man named Jake who needs to tell his story. A man who had tried a few times to get it out there, perhaps for his own piece of mind, and this time he succeeds. He takes us back in time to his childhood, which saying it was difficult is just the tip of the iceberg of the horrors he, his sister Dora, and his mother lived.

His parent’s marriage starts off idyllic, with a football player and a cheerleader. But when his father gets a taste of meth, their life takes a spiral and his father turns into someone completely unrecognizable. Verbal, physical, and sexual abuse at the hands of a monster who is so far from the man he started out in life to be.

The story is told to a tape recorder, and so it is written as Jake would be talking. I think Ross told the story well in that aspect, with dialect and speaking style included. I cannot imagine this was an easy story to write, and even if it is completely fictional, it’s a compelling read that tells the horrors of a family that stayed with a man because there were no other options. Very well done.

You can read my review on Amazon, Goodreads, and Bookbub, and if you’ve enjoyed it, give it a “like”. Grab Memoir from Hell for yourself on Amazon for $4.99.