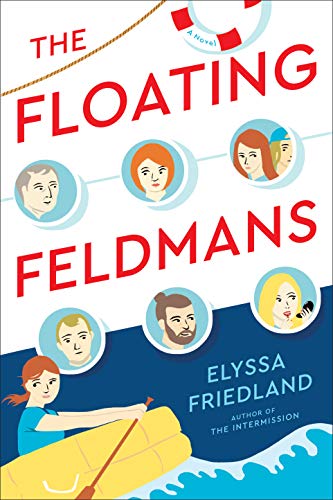 The Feldmans’ matriarch Annette has organized a cruise for her family for her 70th Birthday, not that she celebrates birthdays, because a woman never tells her age. But, a last hoorah so to speak because her husband David is dying. The family doesn’t get together much, and so this is their chance to catch up on everything they’ve missed. But this get together doesn’t go as planned, in fact, it spectacularly bombs, and this is the joy of The Floating Feldmans.

The story was told in alternating viewpoints, mainly Elise’s, but also Freddy’s, and Annettes. We have Elise, her husband, and her two children. I didn’t like Elise from the start, she just seemed too uppity for me. But then her dirty secret started to reveal itself, her addiction to shopping, and it made her a bit more normal in my eyes. While I didn’t like her, she made a good, unlikable character.

Freddy was a good guy and I liked him from the start. He didn’t want to end up like his family, and he didn’t want to be the lost cause they had always declared of him. So turning your life around and become a multi-millionaire seems like just the way to do it. Only his family doesn’t know of his fortune and how he made it.

This was a fun read for me, I liked the characters, both likable and not, and I liked the storyline. I knew from the blurb that things were going to go spectacularly wrong, and they did. A large portion of the book was setting up our characters, and I think the author did it well because it was a more complete storyline. There were amusing parts, but it wasn’t the hilarity I was expecting from the genre it was labeled. But I don’t think that detracts from how good the book is. A very enjoyable read.

For now, you can read my review on Amazon, Goodreads, and Bookbub, give it a like while you’re there. The Floating Feldmans is available for purchase on Amazon for $9.99.