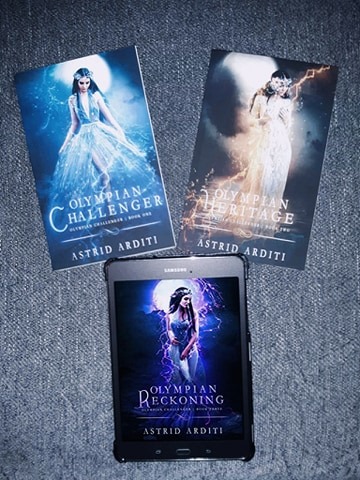 “Consequences, no matter how dire, should never stand in the way of correcting a wrong when offered the chance.”

Hope has come a long way in the Olympian Challenger series. The gods have been released from their prison in Olympia and are now able to travel to earth at will. There, they are wreaking havoc upon humans and things aren’t going well. Hope wants to top them but how do you stop someone that you aren’t supposed to kill? Especially when she’s tied up with Kieron, waiting for an escape.

Hope has come such a long way in this series, she is learning that she can’t do everything on her own and that she has to learn to rely on other’s might have valuable insight that can get the job done. Kieron is such a strong presence in Hope’s life, and she even mentions “If the measure of a man are his actions, then Kieron is the hero in this sordid tale…” We really came to adore Kieron as he fell more in love with Hope, and I know the duo can do anything if they lean on each other.

This has been such a fun series to read. Arditi has weaved the gods and creatures of myth into a fantastic tale. We’ve come to know some wonderful characters and I’ve loved watching them come together after such an event made to tear them apart. I’m particularly fond of Gabriel and Eros together, I think they are a fantastic couple and I love that Arditi has been inclusive in her characters. From beginning to end, there is non-stop action. Such a wonderful read!

You can read my review on Amazon, Goodreads, and Bookbub, give it a “like” while you’re there. Olympian Reckoning is available on Amazon for $4.99. Lastly, head on over to Facebook and give Astrid a follow.