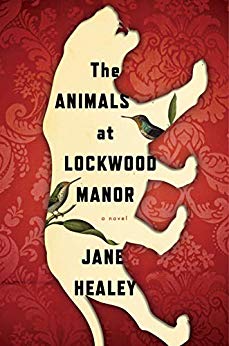 Hetty’s life has been wrapped up in the museum, so when they are forced to move the exhibits in fear of the war that is closing in, Hetty is glad to go with it. But the Lord is a force to be reckoned with, he’s rather unreasonable and he certainly doesn’t see Hetty as an equal. His daughter Lucy would make a great ally for Hetty, but Lord Lockwood doesn’t want Hetty and her animals scaring his already sensitive daughter. But animals are disappearing and Hetty’s concerns fall on deaf ears, brushed off as obsessive and hysterical.

The first thing that drew me to this book was the time period and I loved that there would be a mystical sort of element to the disappearances of the animals. Healey did a wonderful job of building up the mood. The setting was perfectly creepy, a mansion with more rooms than a person could need, with dark nooks and crannies to get lost in. The characters were of varied backgrounds and I appreciated that Healey was inclusive with her characters as well.

For me, the book got a bit repetitive in the day to day 3/4’s in, and I wasn’t as engaged as I had started off. The suspenseful aspect didn’t deliver as much as I felt it would when I first became so engaged. But I think overall, this was a fun read, Hetty was a unique character, driven by a life of feeling unwanted that gave her a sort of obsession devotion to the animals, to prove herself worthy. Overall a fun read.

You can read my review on Goodreads and Bookbub as this was a very early ARC. The Animals at Lockwood Manor is available for preorder on Amazon for $14.99, it releases March 10th, 2020.