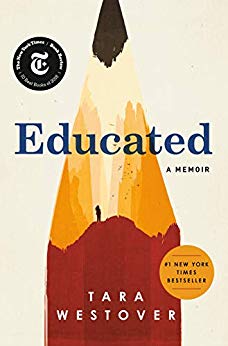 Many people have summed this one up, so I’m going to skip that portion of my review and get right into my thoughts. It’s clear that a lot of Tara’s childhood problems came from mental illness on behalf of her father, and yet, she thought her mother was an ally for her. But then her mother suffered from what appears to be a TBI, and then she no longer had her mother as an ally. Could that merely be a coincidence, a conclusion drawn from the vague inference in the text? Or could it just be that her mother was so devoted to her husband, that it was her duty to back him up?

We see glimpses of a good man underneath the complete disregard for his children’s safety. Still, I think what shines through the most for me is his utter ignorance, and his unwillingness to better himself. Though she does point out that her younger brother does get proper education because her father suddenly supports it, though we aren’t entirely told why outside of “he’s a genius”). Typical of my readings on people growing up Mormon, there’s this element that the way they are living isn’t what the government wants them to do, so there are levels of fear and distrust. I think with that typical feeling it makes her father’s paranoia that much more so, and that paranoia ruled the way the children grew up: hoarding supplies, no public education (or even a proper homeschool education), no appropriate healthcare, etc.

I wanted to be angry with Tara’s endless forgiveness of her brother, her willingness to blame his behavior on the vast amounts of times he was seriously injured, but I can’t. It sounds as if he too is bi-polar like her father, and the atmosphere in which she was raised demanded that family is first and that she forgive him. While it comes through that she did try to avoid him; there were a lot of instances where she could have better avoided him. Her willingness to forgive and to hope things would be better outmatched the knowledge that she shouldn’t be around him.

The fact that the other 3 siblings that left home have a Ph.D. is very telling of the suppression the children that remained at home live under. Tara’s drive to succeed in life shines through in her writing, and while some things seemed to be glossed over in the text, either due to poor memory or writing constraints, she succeeds in her goals. (it’s almost unbelievable how easily money came to her to do all of this between the classes, paying for an apartment, and the numerous flights.) Clearly, there is more at play than what we’re given in the text.) Her goals grow and expand as she goes through personal evolution, and she goes after them.

The thing that kept me from giving this 5 stars was that I felt some of the text was repetitive. Also, either due to poor memory or poor recording, things were brought up but then disregarded and not further explored when they seemed integral to the overall storyline. I would also hazard a guess that Tara suffered from PTSD (possibly C-PTSD though that isn’t in the DSM), and because often her stints in therapy were sporadic, that was why it wasn’t diagnosed. A person that can go through that level of childhood trauma and come out so spectacularly is commendable. Yet I am saddened by her hopes of a reconciliation one day with her family as they are so toxic that she clearly is better off without them.

You can read my review on Amazon (whenever they decide to post it), Goodreads, and Bookbub, give it a like while you’re there. Educated is available for purchase on Amazon for $14.99.