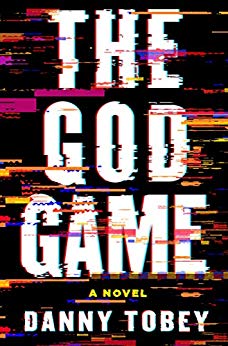 With a chance to play a highly technological game against God, who wouldn’t play and see what could happen? That’s what this group of friends agrees to, and they are hooked from the beginning. Looking through their phones, the world is altered, there are people to communicate with who have tasks for them, and the rewards are great.

Except when things aren’t so great, because of course, that’s how it goes. They’re being asked to do more and more dangerous things, things that compromise their morals and who they are. Yet not all of them are ready to quit the game and we watch the tasks get more complicated and more dangerous.

This was a fun read, I thought the way the world was altered through the game was fun. Tobey had some inclusive characters who had a wide variety of issues that affect teens today. The level of distrust that was built grew to epic proportions and you could visibly watch the group fall apart. This was a fast-paced read, once the action started you didn’t want to put the book down because you had to know what the game was going to ask for next. Nicely done.

For now, you can read my review on Goodreads and Bookbub as this hasn’t released yet. This came to me from St. Martin’s, a favorite publisher of mine. It is available for preorder on Amazon for $13.99, it releases January 7th.