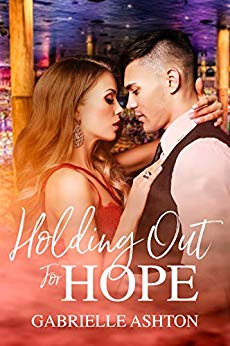 Jesse is a cop and while in Vegas, she’s promised her best friend that she’ll have a one night stand. Joshua Hastings fits the bill, he’s funny and he holds up to his promises. But she sneaks out in the middle of the night not even giving him her name. As each month passes, Joshua can’t get the stranger out of his head, after hours of talking, he knows there will be no other woman for him. So when the two finally run into each other, he wants his chance. But Jesse is singularly focused on her career, she wants to make detective and earn it in a department run by her father. She has no time for Joshua, no matter how charming he is.

I loved Joshua, he was fun, his devotion to Jesse was endearing, and despite a playboy lifestyle in the past, he has turned his life around and is a good guy. Jesse on the other hand sometimes got on my nerves. She overreacts to situations without speaking to Joshua, time and again. She has it in her head of what she thinks he is and doesn’t give him a chance, too many times to count. And don’t get me started on her “best-friend Ross” because I saw his slimy ways well before it was noted by virtually everyone that knew them. But you know what? Ashton wrote Ross so well, and I love it when an author can make me hate a bad guy.

Ashton always writes such incredibly sexy scenes with wonderful characters. I loved Jesse and Joshua together because when it was good with them, it was really good. This is such a fun series, one of my favorites this year. Each book can be read alone, but the characters from other books make appearances. I love this family and this world Ashton has created and I can’t wait to see what she comes up with next.

You can read my review on Amazon, Goodreads, and Bookbub, give it a like while you’re there. Holding Out For Hope is available for purchase on Amazon for $3.99.
A side note while I’m here: Amazon has been running a deal for 3 months of KU for 99 cents or 6 months for $29.99, it’s a great deal so if you don’t have KU, I suggest heading on over and grabbing it.