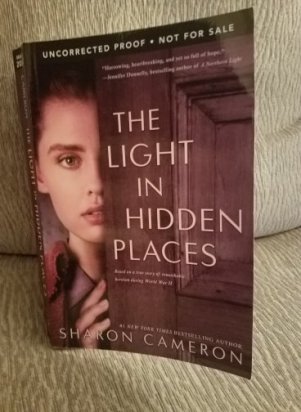 I won this in a Goodreads giveaway from I Read YA and started it as soon as I could as this is my favorite time period in Historical Fiction.

In Poland during the second world war, Stefania, called Fusia, takes a job with a family to get away from home. The family is Jewish, which means little to her as she’s Catholic and safe, but she bonds with the mother, who she calls her babcia, her grandmother, and her sons, mainly Izio and Max. As Hitler starts to deport Jews, the boys must go into hiding. After learning of Izio’s disappearance, Stefania works harder to help protect Max and his brothers. When she finds her younger sister Helena, she knows she will do everything in her power to protect them all, even if it means death for helping the Jews.

Cameron has taken a lesser-known hero of the war and given her a voice. I imagine Fusia’s story is very typical of young girls at the time, the naivety that comes with growing up where secrets are kept from the children, and where a lot of people didn’t want to believe what was happening right under their noses. As Fusia starts to grow up, she sees the horrors that are happening to the Jews. She learns what happens to single girls that get taken advantage of. As she tells us of the lessons she learns, we watch her knowledge expand, we watch the lengths she goes to get what she needs, to protect those she cares about.

Her younger sister Helena was incredibly bright, who caught on quick and picked up a lot of the work at home when Fusia was unable. Fusia really was a beacon of light for the people she kept hidden. Time and again they were so close to being caught, but her quick thinking kept them all safe. The Light in Hidden Places is a story that needed to be told, that is worthy of everyone’s time, and a definite must-read for fans of Historical Fiction.

Read my review on Amazon, Goodreads, and Bookbub. The Light in Hidden Places is available on Amazon for $11.99.