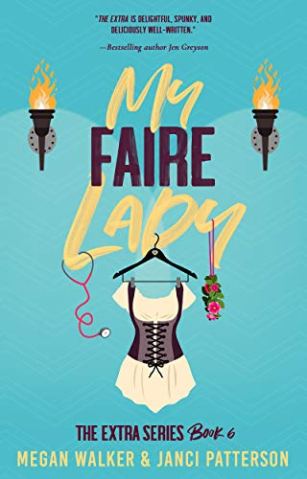 With Will working on his second novel, Gabby picks up a second job at the Ren Faire to make ends meet. This isn’t her scene, but she’s determined to make the most of it. It’s going to be an easy week putting bandaids on cuts and scrapes, and making sure people are hydrated. But she gets more than she bargained for with a case of pubic lice. And when there’s one case, there’s surely more to follow, especially in Gabby’s world. Let the hilarity ensue.

Meanwhile, on the homefront, things are tense with Will and there’s a growing distance between them. They aren’t connecting as they used to, and Gabby isn’t sure how to fix things. With her low self-esteem, Gabby is internalizing their problems, a lot of which could be worked through if she and Will would just open up to one another. Proving that relationships need communication.

This has been such a fun series to read. The characters are all interconnected, but the books can be read as standalones (which I adore). I laughed so much in this one. Walker and Patterson are the duo to beat when it comes to romantic comedy. I loved that they went back to give Gabby fans more of her story, as I will always have such a soft spot for her because she’s such a relatable character. My Faire Lady is so well-written, filled with romance, comedy, and multiple real-world issues. Another fantastic addition to the series!

If you’re on Amazon, Goodreads, or Bookbub, give this review a ‘like’.

My Faire Lady is available for purchase on Amazon for $5.99. Haven’t started the series? Grab book 1, The Extra for free on Amazon.