I might be a bit of a Koontz fan (who needs more bookshelves, and thus, has very disorganized shelves).

Right now I’m lucky to have KU. And I’m really thankful that Koontz put Devoted into KU because as a person who lives off disability, I can’t buy his books right now. I want nothing more than to turn the ebooks I have of his into physical copies. So I’m hoping that soon, things will start to get better and I can work on growing my collection. So, onto Devoted! 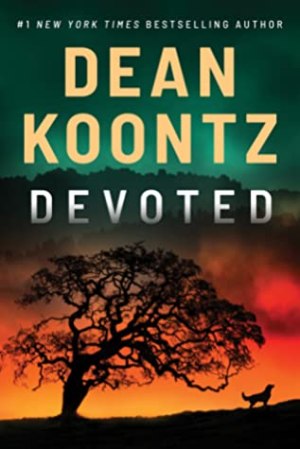 Normally when I review, I summarize the book in my own words, but I think I will skip that for this one. Many people have already done that, and I think the artwork and the blurb speak for themselves. (I will include the blurb at the bottom of this post).

The thing I love about Koontz’s writing, in which he does in Devoted, is that we meet characters in bits and pieces, and then they will all eventually come together in masterful storytelling. I also love that he includes lines from other books, such as “this momentous day” because it makes it feel like all the books are connected, and they are. Which might sound corny, but I love that I notice these things.

The characters are fantastic and ever-evolving, starting with Dorothy, and while she isn’t in the story for long, she makes a big impact because of Kipp. I love the science behind what is happening to the antagonist, Lee Shacket. His singular focus slowly breaks down as he evolves. He’s not the only bad guy in this book and as twisted as it seems, I like the varying bad guys coming for Megan, Woody, and Kipp because it creates the perfect tense atmosphere and you find yourself anxiously turning pages to find out how they will handle it.

A super fun, fast-paced thriller with the right balance of supernatural and suspense.

Devoted is available on Amazon for $6.99, it’s enrolled in KU.

Woody Bookman hasn’t spoken a word in his eleven years of life. Not when his father died in a freak accident. Not when his mother, Megan, tells him she loves him. For Megan, keeping her boy safe and happy is what matters. But Woody believes a monstrous evil was behind his father’s death and now threatens him and his mother. And he’s not alone in his thoughts. An ally unknown to him is listening.

A uniquely gifted dog with a heart as golden as his breed, Kipp is devoted beyond reason to people. When he hears the boy who communicates like he does, without speaking, Kipp knows he needs to find him before it’s too late.

Woody’s fearful suspicions are taking shape. A man driven by a malicious evil has set a depraved plan into motion. And he’s coming after Woody and his mother. The reasons are primal. His powers are growing. And he’s not alone. Only a force greater than evil can stop what’s coming next.