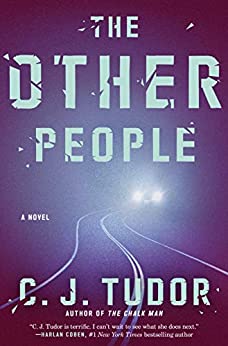 On his way home from work, Gabe sees his five-year-old daughter Izzy in the car ahead. But it can’t be her because she’s at home safe with her mother. He tries to follow the car but ends up pulling over to call home to make sure. What he learns is far worse than he could have ever imagined. Three years later he is but a shadow of his former self. But he hasn’t lost hope, trolling the highway in search of his daughter.

This story was addicting from the very start. I loved the setup of a man that had his daughter so close and then lost her. The way “The Other People” came into play was very creative. Before it was explained, there was just a hint of paranormal at play. The storytelling is excellent. I liked the way the mystery unfolded, from multiple points of view to slowly come together. This is my first book by Tudor and it definitely won’t be my last.

The Other People is available on Amazon for $13.99

He never sees her again.

Three years later, Gabe spends his days and nights travelling up and down the motorway, searching for the car that took his daughter, refusing to give up hope, even though most people believe that Izzy is dead.

Fran and her daughter, Alice, also put in a lot of miles on the motorway. Not searching. But running. Trying to keep one step ahead of the people who want to hurt them. Because Fran knows the truth. She knows what really happened to Gabe’s daughter.

Then, the car that Gabe saw driving away that night is found, in a lake, with a body inside and Gabe is forced to confront events, not just from the night his daughter disappeared, but from far deeper in his past.

His search leads him to a group called The Other People.

There’s just one problem . . . they want other people to know it too.