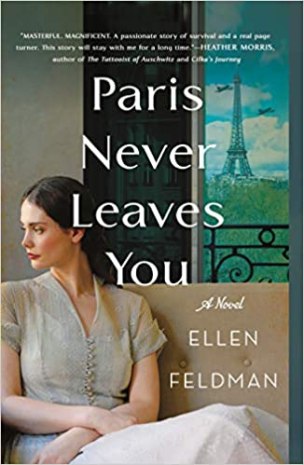 Told in alternating timelines of Paris during the ‘40s, and New York in the ‘50s, we follow Charlotte’s unwavering protection of her daughter, Vivi, during the war and her desire to protect her from the past a decade later Those who worked with the Germans faced harsh repercussions from their fellow man. Charlotte is doing what she thinks is best to feed her daughter, who is withering away by the time that part of the story starts. But it’s a dangerous business working with a German officer, no matter how good that man’s intentions may seem.

In the book’s present-day, Charlotte doesn’t want to face the past and what she did. She hides in shame for her actions. Actions we might not see as shameful but weren’t in her position to judge. Vivi is a good daughter, and she’s incredibly smart. She desires to know more about her father who lost his life to the war. She wants to know more about her heritage, which her mother would rather keep buried.

I enjoyed this one more than others, and perhaps it’s because I read a lot of WW2 historical fiction that I’m able to enjoy Charlotte’s unique voice. Feldman gave us Charlotte’s life during the war, which didn’t wholly reflect that of others. It doesn’t show fully what is happening to the Jews, and that’s okay. The big story here is a mother’s fierce protection of their child and living with the guilt that comes with Charlotte’s situation. I find her guilt raw and honest. Part historical, part romance, this is a well-written, enjoyable read. Thank you, St. Martin’s, for sending this along!

Paris Never Leaves You is available for preorder on Amazon for $9.99, it releases August 4th.

Read this review on Goodreads and Bookbub.