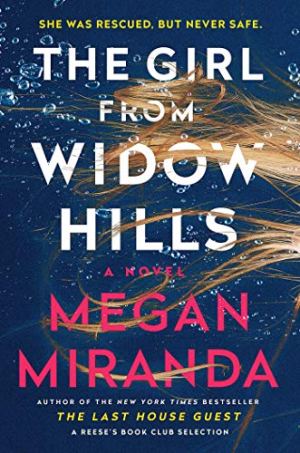 This one came to me from Simon & Schuster, and once I started it, I didn’t want to put it down. I requested to review this one because, I too am a sleepwalker, and I loved the idea of things going so fantastically awry for Arden. Miranda wrote her suffering so well. The combo of the lifetime fear of enclosed spaces and the fear of being found is a perfect storm to keep her PTSD alive.

I can’t even imagine how hard it was for her dealing with the fallout from her disappearance. To suddenly start sleepwalking again and then wake up to a dead body would have you questioning yourself and those around you. The storyline has you constantly guessing what is going on and who Olivia should trust. I was not prepared for the secrets that came out or the big reveal. The closer I got to the ending, the faster I read. This was a super fun read from start to finish.

The Girl From Widow Hills is available on Amazon for $12.99.

Everyone knows the story of “the girl from Widow Hills.”

Arden Maynor was just a child when she was swept away while sleepwalking during a terrifying rainstorm and went missing for days. Strangers and friends, neighbors and rescue workers, set up search parties and held vigils, praying for her safe return. Against all odds, she was found, alive, clinging to a storm drain. The girl from Widow Hills was a living miracle. Arden’s mother wrote a book. Fame followed. Fans and fan letters, creeps, and stalkers. And every year, the anniversary. It all became too much. As soon as she was old enough, Arden changed her name and disappeared from the public eye.

Now a young woman living hundreds of miles away, Arden goes by Olivia. She’s managed to stay off the radar for the last few years. But with the twentieth anniversary of her rescue approaching, the media will inevitably renew its interest in Arden. Where is she now? Soon Olivia feels like she’s being watched and begins sleepwalking again, like she did long ago, even waking outside her home. Until late one night she jolts awake in her yard. At her feet is the corpse of a man she knows—from her previous life, as Arden Maynor.

And now, the girl from Widow Hills is about to become the center of the story, once again, in this propulsive page-turner from suspense master Megan Miranda.